(Unless otherwise specified, information about Costa Classica in this virtual ship tour was correct at the time of publishing after the author travelled on the ship in June 2010.)

Deck 3
There are the Medical Center and gates for tender embarkation. They can both be reached by the forward staircase. Other areas on this deck cannot be accessed by passengers.

Medical Center:
The Medical Center is a clinic that provides consultations and basic medical treatments to passengers.

Deck 4 (Venezia Deck)
Named after the city of Venice, Deck 4 is one of three decks on the ship with a full deck of passenger cabins. Inside and oceanview staterooms can be found.

Atrium (Atrio Centrale):
The five-deck high Atrium begins on Deck 5 and reaches Deck 9. It is the main lobby of the ship and the first place that passengers pass through when they embark. A sculpture called "Ginger & Fred" by Luciano Vistosi is placed in the central area as decoration.

Chapel (Cappella):
There is a chapel in front of the Atrium. Roman Catholic religious services are provided by the ship's priest.

Deck 6 (Amalfi Deck)
Deck 6 is another deck filled with cabins. There are both inside and oceanview staterooms.

Deck 7 (Genova Deck)
Deck 7 is named after the city of Genoa and is the highest deck with non-balcony cabins. Same as Deck 4, Deck 5 and Deck 6, there are both inside and oceanview staterooms.

Deck 8 (Roma Deck)
Named after Rome, the capital of Italy, Deck 8 is totally composed of public area. The theatre and the main dining room are both located on this deck, at the forward and at the aft respectively. There are also a bar, meeting rooms, conference centre, card room, library and Internet centre.

Colosseo Showroom and Bar:
The 700-seat, two-deck high Colosseo Showroom at the forward end of Deck 8 and Deck 9 is the main performing venue on Costa Classica. The horseshoe-shaped showlounge has an amphitheater layout. It is decorated red, with mosaics designed by the Italian artist Emilio Tadini on the upper-level walls. There is a small bar just outside the entrance on Deck 8.

Tivoli Restaurant (Ristorante Tivoli):
The main dining room is situated aft of Deck 8. It is in open seating for breakfasts (in buffet) and lunches, and has two seatings (18:30 and 20:30) for dinners. The galley is at the stern.

Piazza Navona Grand Bar:
Positioned amidships of Deck 8, the Piazza Navona Grand Bar is the internal focal point of the ship and is decorated with statues. It is the largest bar with a dance floor, and many night-time activities are held here. At the centre there is a suspended staircase linked to Deck 9 which can overlook the Atrium several decks below.

Card Room:
It is the room for playing card games or Mahjong.

Library (Biblioteca):
The Library is next to the Card Room. Passengers can borrow books when it is open.

Internet Point:
The Internet centre provides Internet access with a charge through one of several computers.

Deck 9 (Firenze Deck)
Named after Florence, the historic city famous for Renaissance culture, Deck 9 is another deck that accommodates most indoor public area. At the forward end there are the entrances to the upper level of the theatre, whereas the aft end houses the ballroom and the casino. At midships there are two bars, several shops as well as the photo gallery. The promenade is also located on this deck.

Colosseo Showroom:
The upper level of the theatre can be accessed on Deck 9, near the Photo Gallery.

Puccini Ballroom:
The Puccini Ballroom at Deck 9 aft serves as the dance floor in the evenings and as a disco at late nights. Small-scale talks and activities are also held in this venue during daytime. Passengers can have a drink here and at the same time enjoy the views at the stern.

San Remo Casino:
The casino on Costa Classica has both gaming tables and slot machines. Late night snacks are offered here. Passengers who wish to enter the aft Puccini Ballroom have to pass through San Remo Casino in front of it.

Arcade (Mondo Virtuale):
The corridor at the starboard side entrance of the casino is a small Arcade, which provides video games for passengers.

Il Dolce Amore:
Situated at the port side and at the top of the Atrium, Il Dolce Amore is a patisserie that offers pastries and after dinner drinks.

La Tavernetta:
La Tavernetta is a pizzeria with different pizzas as specialities every day. It is positioned at the starboard side, opposite to Il Dolce Amore.

Ponte Vecchio Shops:
There are several shops and boutiques at midships of Deck 9 including "Bijou", "Vetrine del Mondo", "Bellissima" and "La Tosca". They sell souvenirs and duty-free items such as jewellery, watches, perfumes and cosmetics. "Chez Classica" and "Mangia" offer a wide variety of fashion.

Photo Gallery (Galleria Foto):
The Photo Gallery is located outside the upper level of the Colosseo Showroom. Nearby is a shop called "Paparazzi" which sells photography items.

Promenade:
The Promenade on Costa Classica is not wrap-around, and is crew-only at both port and starboard sides.

Deck 10 (Portofino Deck)
The forward end of Deck 10 is crew-only (the forward staircase bypasses this deck), as the bridge is located there. At midships there are ten suites, which are the only balcony cabins on the ship. A buffet restaurant with both indoor and outdoor area can be found at the stern.

Suites:
In addition to all the features in inside and outside cabins, each Suite has a private rounded balcony, bathroom with Jacuzzi bathtub, separate shower enclosure and separate living area. Suite guests also enjoy privileges such as priority boarding, butler service, fresh fruit every day, lunch and dinner served in cabin, priority in the choice of table in restaurants, and invitation for an exclusive cocktail with the Captain.

Alfresco Cafe:
Alfresco is the outdoor area of La Trattoria Buffet and enjoys marvellous views of the stern. Traditional canvas sailcloth awning shelters the café from the sun.

Teen's Zone:
It is the children's centre which provides an array of activities for the young passengers onboard.

Deck 11 (Capri Deck)
Deck 11 is the sports deck. The gymnasium and beauty salon are situated at the forward end, whereas two pools are situated amidships and aft.

Piazza Trevi and Swimming Pool:
It is one of the outdoor swimming pools on Costa Classica and is located amidships. The pool is surrounded by a small performing stage and large number of deck chairs.

Aft Swimming Pool and Jacuzzi:
The aft swimming pool on Deck 11 is behind the huge yellow funnel. It is surrounded by two jacuzzi hot tubes and several tiers of deck chairs.

Caracalla Spa:
The Caracalla Spa at the forward of Deck 12 comprises a fitness centre, aerobics area, sauna, jacuzzi and treatment rooms. There is also a beauty salon.

Positano Bar:
The Positano Bar is positioned at the port side of Deck 11, which offers light snacks and drinks.

Squok Club:
The Squok Club is a children's room at the starboard side of Deck 11. It provides various programmes for young cruisers at ages from 3 to 17. 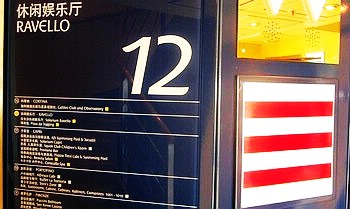 Deck 12 (Ravello Deck)
There are no indoor facilities on Deck 12. The jogging track (Pista da Jogging) surrounds open decks (Solarium Ravello) and can overlook the midship and aft pools. 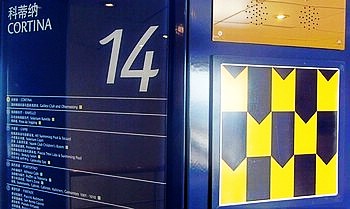 Deck 14 (Cortina Deck)
Deck 14 is the highest deck on the ship (there is no Deck 13) and is only accessible via the forward staircase. A forward observation lounge sits atop the ship, which can also overlook the pool area on Deck 11.

Galileo Club and Observatory:
It is a disco located forward of the superstructure, and is enclosed by circular floor-to-ceiling glass. It acts as both an observatory and a nightclub with views over the lower decks. 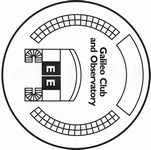 Back to Virtual Ship Tours